Prototype power board to light up four Raspberry Pi's

Building the actually power board was fairly straightforward. I started with a prototype on a simple rectangular grid-style PC board (Radioshack 276-149), which measures roughly 45mm by 70 mm (1 27/32 inch by 2 27/32 inch). It provides ample space for everything that needs to be done. The build was really not much more than positioning the components and attaching everything.

Begin with drilling the hole for the toggle switch. That way, you won't have any debris gathering in your components.

The USB ports will pre-drilled fit in the holes, but you may have to bend the clamps on the sides out of the way. Make sure you get the  polarity right. Wikipedia has a page on USB connectors that shows you the pin layout. In my build, I am using a vertical double type A connector.

Position the components on the side of the board that does not have the solder rings. All components fit through and can be soldered on the other side.

After positioning the components, carefully bend the end of the leads that stick through to secure the pieces to the board before soldering them. Soldering is a lot easier when the stuff doesn't move around.

Position all components on the board before you start soldering them in place. De-soldering isn't all that easy and it always leaves a little bit of a mess. Get it straight the first time.

Once all the components are soldered in place, wire them up. Since I had it  laying around, I used 24 gauge pre-tinned copper wire (Radioshack 278-1341). Besides, AWG 24 is rated up to 3.5 A for chassis wiring, and with 4 USB ports, I should only draw around 2 A. 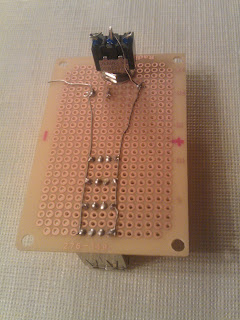 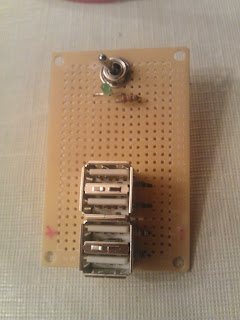 The first board, as shown above, does not have the power bus on it yet, but that should be a relatively simple addition. The solder joints aren't perfect, but they seem to do the trick.

After checking the connections for shorts with a multi-meter, the board was hooked up to the main power supply. Using my USB tester cable, I did confirm +5 V over the USB cable. Time to hook up the RPi's! 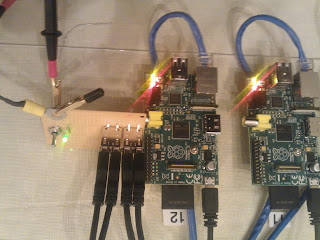 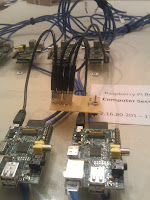 Adding a little power to the boards, and toggling the switch to the 'On' position, did what I hoped it would. The power LED came on, and my four boards powered up. Putting the multi-meter inline with the power supply proved that I indeed made the right design decision; these four boards pull fairly significant current: 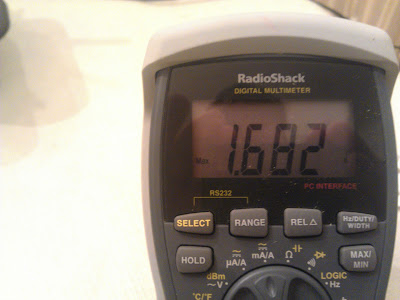 The next step will be to build two more boards, and a distribution panel that connects the power supply to the boards.

Next: mounting the board boards.
Posted by Kees Leune at 7:01 AM