14 Raspberry Pi's on a single board with custom power supply

Having mounted all power boards, it comes time to turn attention on the power distribution box. It turns out that this was by far the easiest element in the entire build. First off; all power boards have a black/red 18 gauge speaker wire (Radioshack 278-567) soldered directly to the board (red for +5 V, black for ground). The other end of the cable was terminated in ring connectors (Radioshack 64-3120). All the ring connectors were gathered on a bolt and a nut was added to keep everything tightly together. 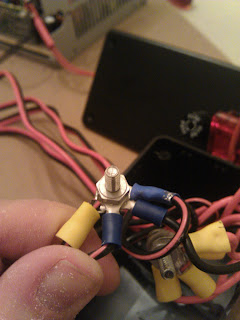 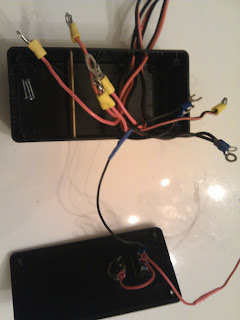 To make the power distribution box, I got a project enclosure box (Radioshack: 270-1803) with a little bit of perforated board cut to size. After drilling some holes in the perf board to hold the leads, and a little notch in the top of the board to allow the fuse line to go through, it is a matter of connecting everything together. 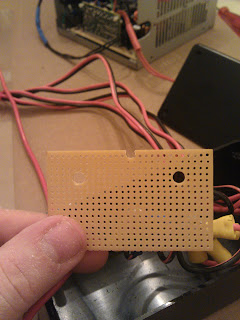 Note that the holes on the perf boards are pretty much as far apart as I could make them. it is going to be quite crowded in the box, and you don't want +5V and ground lines touching each other. By spacing them this way, they have plenty of space. Note that you also want to keep some space from the side to allow for mounting in the box. 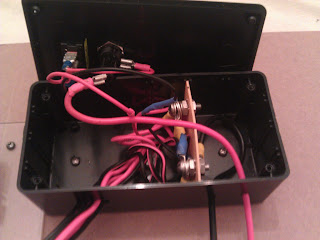 On the right-hand side of the power box, we see red and black coming in from the power supply. For this, I used installation wire. On the left-hand side, we see the power go out to the power boards. The lid of the power box has a switch and a fuse. The switch doesn't really serve much of a purpose if your power supply also has one, but since I was building anyway, I figured that I might as well add one. Next to the switch is a 10A fuse. 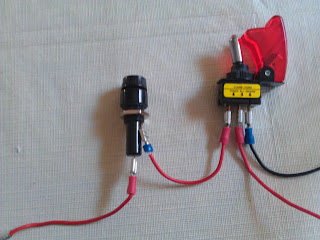 Note that this switch has a built-in LED, which doesn't give you an option to play with polarity. On the left, you must connect incoming power. The second terminal must connect to the switched power (Acc) and the right-most terminal connects to ground. While in some cases, you may choose to omit the ground wire, you cannot do that here because of the build-in LED in the switch. From a safety point-of-view, having the ground wire is a better plan anyway.

The connectors used here are flexible quick-release terminals. They work very well for stuff like this. Now that everything is in place, the project box can be closed up too.

The final power distribution box looks like shown below. 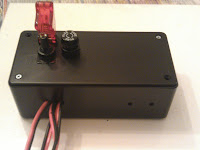 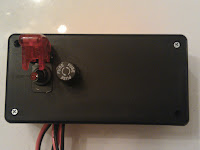 After mounting the plexiglass sheet on an MDF panel for added rigidity, the power supply and the power distribution panel can be added also. The full assembly looks like shown below when everything is on, and active. 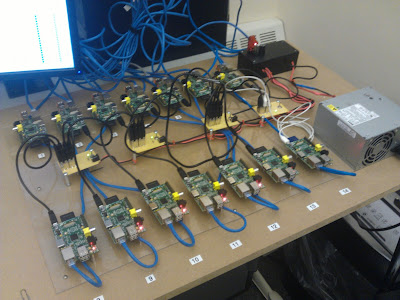 After this, we'll start work on the software.
Posted by Kees Leune at 11:33 AM