With the individual power boards at completion, it is time to bring line power to them, and to mount them on the main board.

First of all, I learned another lesson: scalability is nice to keep in mind, but don't let it complicate things too much. My master plan was that I would make small power boards that would power up to four Raspberry Pi's each, and that the smaller boards would connect back to one power distribution board. That concept still stands, and I believe it is the right way to go.

However, what I also tried to do was make things convenient. I figured that I would attach one DC power jacks on each of the power boards and one DC power jack for each board on the distribution panel. I would then connect the whole lot together using some power jacks connected to two-conductor cable, and I would be ready to go. I did indeed go so far as to mount the power jacks on the boards, but in the end, I decided to not use them and solder the power feed directly to the smaller board .

At the other end, with the distribution board, I will create some form of scalable something, but most likely it is just going to be ring terminals held together by a nut and bolt. In this case, simplicity wins over elegance.

Since the power boards have a switch on them that protudes a fair distance, I cannot use the same standoffs that I used to mount the Raspberry Pi's. Instead, I chose the slightly longer 0.875" standoffs (Digikey 1859K-ND) instead. Note that unlike the Radioshack standoffs, these don't come with screws. If you don't have them in stock, you'll need to provide your own. 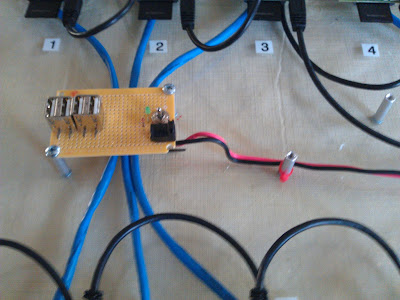 Once mounted on the board, they look pretty good. One word of caution: the standoffs need 8-32 machine screws, which are just too wide to fit in the pre-drilled holes on the circuit board. If you are going to use them, you'll have to widen the holes with a drill before attempting to mount. Failure to do so leads to the bottom-right corner: it snaps the circuit board.

I used a little zip-tie to secure the cable to the standoff of the power board immediately to the right; it provides some tension protection and it will just look nicer. 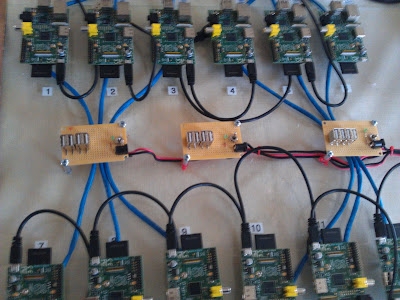 Mounting the additional boards will then complete that part. Don't connect the power to your Raspberry Pi's yet! You'll want to complete the build-out of your power distribution panel and hook that up to both the outbound feeds to the boards, and the incoming feeds from your power supply first. Then, you'll want to grab your multimeter to check that you have not actually created accidental short-circuits and that you measure power at appropriate levels. Make sure that all toggle switches are in the off positions before you start connecting stuff.

Next: 14 Raspberry Pi's on a single board with custom power supply
Posted by Kees Leune at 5:47 AM