Now that we have the Raspberry Pi's mounted on a plexiglass board and a power supply has been obtained that can easily put out the 8 A at 5 V requirement, it is time to give some thought on how to get the power to the board. Whenever you build something, there are a few design principles to follow:

1. Safety first
2. Make the design scalable
3. Keep it as simple as you can make it

Safety first means that I don't want to have to worry about excessive power all going through one circuit. If I can break it up in smaller sections, I think I'll prefer that. Looking at the problem at hand, there seem to be two ways to get power to the RPi. One is using the micro USB connector on the board, and the other is via the GPIO pins. After reading quite a bit of online articles, I decided against using the GPIO pins and I went for a USB-based approach instead.

Having made that decision, I decided to go for three power boards, each containing 4 USB ports. The boards must be put in parallel to distribute the current requirement. Each board will have a toggle switch to power it on or off, an LED to indicate if it active and the main circuit will have a fuse in it; for the time being fused at 10 A. If I decide to add additional Pi's, all I need to do is add a board and maybe upgrade the fuse. 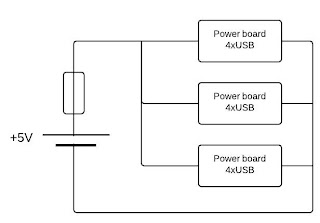 Theoretically, each power board should be able to deal with about 2 A. Note that I will not need a separate power switch or LED indicator for the total circuit, since that is taken care of by the power boards.

Each power board is relatively simple also; two double USB-ports (DigiKey: ED2984-ND) in parallel, a toggle switch (Radioshack 275-613) and an LED indicator to signify that the board is on.

Note that pin 2 and pin 3 of the USB ports have been shorted; that just means that no data will flow and that the port can only be used for charging. The resistor in series with the LED is just a current limiter; the LED (568nm; green) has a forward voltage of 2.2 V, which leaves 2.8 V over the resistor. I need a current of 25 mA, which means that the resistor needs to be about 120 Ω. Because I had them, I put in 330 Ω, which gives me a current of about 8 mA. Not the brightest LED, but that's okay.

For now, the plan is that I'm going to build up the circuits using a simple PC Board.

Next: Prototype power board to light up four Raspberry Pi's
Posted by Kees Leune at 7:20 PM