Power requirements of the Raspberry Pi Model B

The Raspberry Pi (Model B) is a nifty little device. It isn't loaded with computing power, but there is enough on the board to make it a fully functional computer. Since it can be powered by a USB cable, and USB ports are supposed to provide up to 500 mA of current (at +5 V), I had hoped that grabbing a multi-port USB hub with external power could do the trick.

Of course, any time that I would have done the math, I should probably have known better. A dozen RPi's at 500 mA each would mean 6 A of current without blinking.

After inspecting the external power supply to my USB hub, I found that it was rated to provide only 2 A. Oops; that won't do. But, since it is a bad idea to believe what you read without giving it a go, I started connecting RPi's to the hub and began powering them up. Sure enough, after four devices, we ran out of juice and the boards didn't get the power they needed.

Well; that threw a wrench in the mix. For me to figure out how much current these things actually draw, I had to sacrifice a USB cable. USB wiring is simple; there are only four strands. Two of those are for power (the outer two pins on the connector; typically red and black in the cable) and two of those are for data. Since we don't use the hub for data transfer, we don't really care about those two wires. 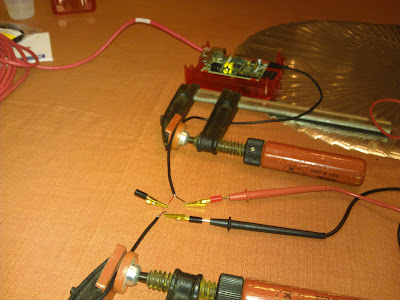 The photo listed above shows the RPi connected via a cross-over cable to my laptop, a micro-USB cable that had been opened up and the ammeter connected via alligator clips. To my surprise, the RPi draws the highest current when it is booting up; even when having the processor run at full load after it boots, it doesn't peak much after that. Measurements were consistently between 410 mA and 450 mA. Note that in my scenario, I am only putting load on the network jack. I presume that adding stuff to the USB ports and to the HDMI port will lead to a higher draw. 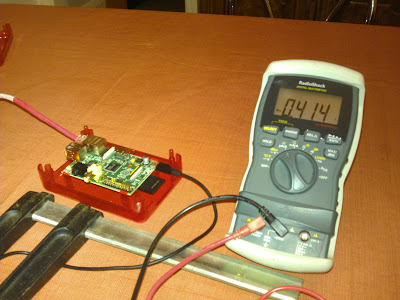 At this point, I am looking at potentially up to 15 devices drawing 450 mA each. After adding some overhead, it seems like I need to be able to provide between 8 A and 9 A of current.

Next: Using a PC power supply for Raspberry Pis